Which are the places you think you are not supposed to be in? A conversation with a creative entrepreneur and actor on breaking out of comfort zones, channelling fear into audacity, and how to not become a voyeur of your own success

Note: Welcome to the first episode in a new series, “Personal Journeys”. As the name suggests, the series is based on one-on-one conversations with some of the finest minds from the world beyond business, where they share their stories, their inflection points, and their learnings.

“We create our definitions, our boundaries,” says Ashish Vidyarthi. “As an actor, I've relished this ability to break any boundary of mine, both in terms of the characters that I play, and the cultures and subcultures that I explore. My lifelong wish is not to belong, not to be identified as ‘are you this are you that?’ I am not as. I'm also.”

Ashish’s personal journey has been anything but linear.

He made his career debut with theatre, moved on to act in Bollywood, won a National Film Award, and then broke his mould to act in Indian language films—more than 200 films in 11 languages.

And then he made yet another seemingly non-intuitive pivot—as a motivational speaker and entrepreneur. Six years ago he created Avid Miner, to run performance labs, work in leadership development, and engage with organisations, institutes and entrepreneurs.

In a conversation with Founding Fuel’s Charles Assisi, on YouTube Livestream on June 16, 2020, Ashish spoke about what drives him to push his boundaries, his learnings along the way, and his hunger to discover more.

How does he feel about being known as a villain? “It’s part of the deal. You only make money from brands.”

So, who is the real Ashish Vidyarthi? “Have I to know who I am and  who you are? Or can I actually reveal aspects of myself to me?” Watch the clip:

On fear: “Fear is not something to be fearful of. I am hungry because I am fearful.” Watch the clip:

On the ability to rethink: “Yes, I get dilemmas. But when in doubt, I move. As you move, new horizons will appear. New solutions will appear, new access will open up. You’ll get more no’s than yes’s, and those few yes’s will do something.”

On courage and audacity: “If you are audacious, openings will come up for you. There will be some extraordinary opportunities for you to learn from people who are much taller than you. And audacity is that you dare and stand with them.” Watch the clip:

How do you stay grounded? “I have had many pre-Covid Covid times…. [From Ashishji to Aziz Vaidyanathan] that lit me up forever.” Watch the clip: 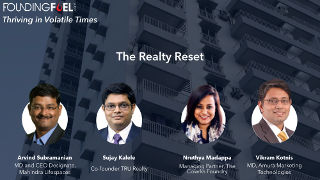 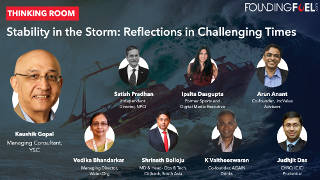 Stability in the storm: Reflections in challenging times