Employment patterns are changing due to technology, emergence of new forms of enterprises, demand for social security, need for new skills, and the way enterprises are regulated 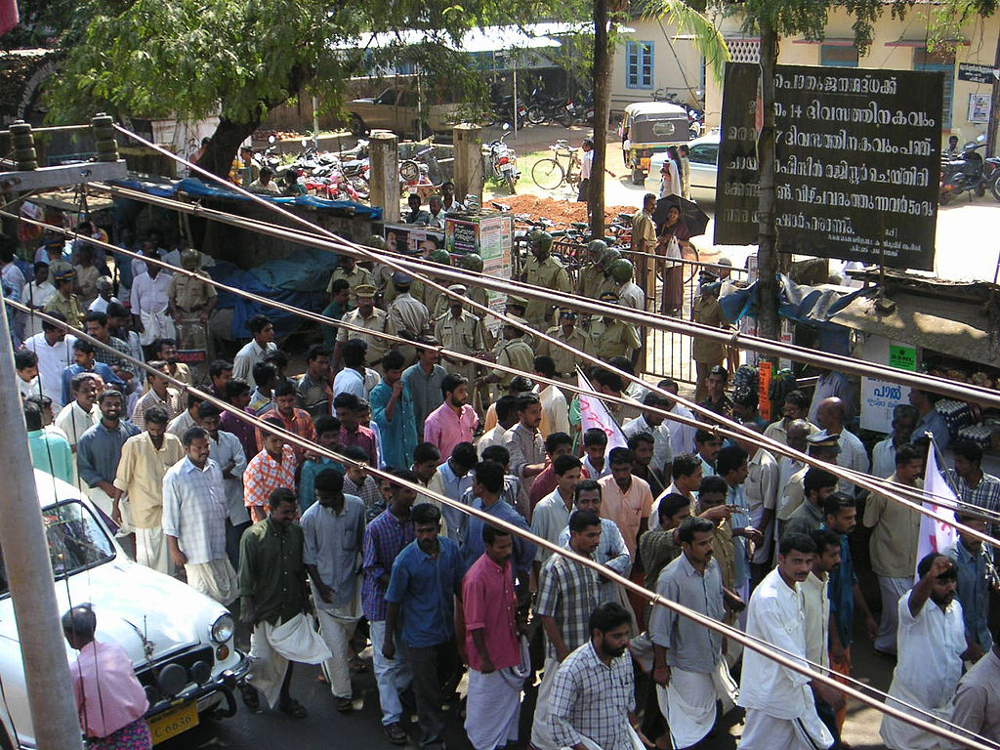 [Photograph: DYFI rally in Kerala by Soman under Creative Commons]

It is high time we stop touting India’s demographic dividend and concentrate on preventing an unfolding demographic disaster. The United Nations Development Programme’s (UNDP’s) recently released Human Development Report points out that while India’s working age population increased by 300 million between 1991 and 2013, the economy could employ only 140 million. Now, very large numbers of young people, even when educated and skilled, cannot find decent jobs. This is fuelling unrest in many parts of the country. By 2050, another 280 million people will enter the jobs market making India the most “job stressed” country in the world.

Several global forces are converging to change the landscape for jobs. Most countries, developing and developed, are facing an acute problem of generating enough decent jobs for their youth and are searching for new policy solutions. India’s problem is the largest. It is also perhaps the most complex, with old-fashioned agriculture co-existing with newfangled internet enterprises, with policy powers spread among many governments at the centre and in the states, and with short-term political pressures on policy makers, attenuated by its free press and by sound-bites and insults to them on social media. The space for stepping back to take in the big picture, to reflect calmly on the driving forces shaping the system, and to take coordinated action, is shrinking.

At least five major drivers are shaping the market for jobs. The first is technology. Automation and artificial intelligence are making people increasingly redundant in production and service industries. A hope is that new technology-driven enterprises, such as Uber which has upended conventional jobs for taxi drivers, will create more opportunities for work. However, other technologies are being tested to develop driver-less cars. These will reduce the need for Uber’s drivers. Moreover, production of driver-less cars will be done in increasingly automated, even unmanned factories. What will human beings do in these “Industry 4.0” scenarios? This is the question that International Labour Organization’s Future of Work project is grappling with.

The second driver of change in employment patterns is the emergence of new forms of enterprises. Uber and Airbnb have changed the transportation and hospitality industries. Google and Amazon have transformed the knowledge, publishing, music and retailing industries. Such disrupters are creating new opportunities for people to earn, learn and to be masters of their own businesses. Whether these new forms of enterprises will create more or less employment overall has not been established. What is clear is that they are changing “employment” relationships.

The third driver for change is demand for social security. Flexible employment arrangements in Indian manufacturing industries, with the expectation that they will increase the numbers hired, are raising issues of fairness. How will employees look after their families’ housing, education and medical needs when their incomes are uncertain? Will the state provide the social security? If so, should it not tax employers (including the likes of Uber, who may not consider themselves employers at all), who make profits from the flexible arrangements? When there is demand in India to provide for social security even for domestic workers, society will not let off business owners easily from responsibility for providing social security for workers engaged in their businesses, whether they have formal employment contracts or not.

The fourth driver is skills. Advanced industrial countries are concerned with re-skilling their workers for Industry 4.0. India is trying to catch up to provide the needs of Industry 2.0 (mass production), even Industry 1.0 (like brick-masons and tailors). However, with rapidly changing industry patterns, should not India also prepare for Industry 4.0 at the same time? Processes of skill development will have to be more dynamic, with much of the development of skills “on the job” and within evolving enterprises. The complication for this is that businesses who do not want to have long-term employment relationships (who have short-term contract workers, or even have no employees like Uber) may not want to invest in the development of the skills of their workers. This will require a paradigm shift in policies for skills development.

The fifth driver is regulation of enterprises. On one hand, there is a cry that entrepreneurs must be made free of regulations, so that they can innovate and grow their enterprises (and with that, hopefully create more jobs too). On the other hand, as already noted, there is need to compel enterprises to invest in skills and social security. Impacts on the environment must be regulated, as well as consumer safety. No doubt, over-regulation, or wrong regulations, will cramp enterprises and will reduce employment. However, too little regulation, or bad regulation, will lead to a damage to public goods—the environment, the availability of skills in the market, and trust in enterprises—which will also hurt businesses in the longer run.

The interplay of these principal drivers (and others too) will determine whether there will be enough good jobs for the hundreds of millions of young people who will be coming into the Indian jobs market in the next few decades.

A characteristic of systems with many interacting drivers is that causes and effects are separated by both time and space. That actions today will have consequences tomorrow is easily acknowledged. However, what the effects will be is not easy to anticipate. A principal reason for this is that causes and effects often lie in different parts of the system. For example, a policy for giving industry more freedom to hire and fire, that an industry ministry may advocate, may reduce the quality of skills in the workforce, which a skills ministry is concerned with.

Converging complexities that are shaping scenarios for jobs require systemic ways to address them. Ministries work within their authority silos, and experts think within their intellectual domains. Policy makers are also pressed for solutions by stakeholders who may see the world only from their limited perspectives. However, drivers within a system cross these boundaries. Technologies of scenario planning can enable policy makers and stakeholders to shift from silo-thinking and silo-actions to systems thinking and collaborative actions. India’s leaders must apply these urgently.

We must get our act together. The stakes are very high.

1. The future of manufacturing—and what it means for Make in India

2. Want 'Make in India' to succeed? Improve the ease of doing business

3. A new vision for Make in India: Create a web of small, nimble enterprises

4, Mind the gap: Boosting a climate of entrepreneurship

5. The robots will take our jobs. Then what?

6. The future of India