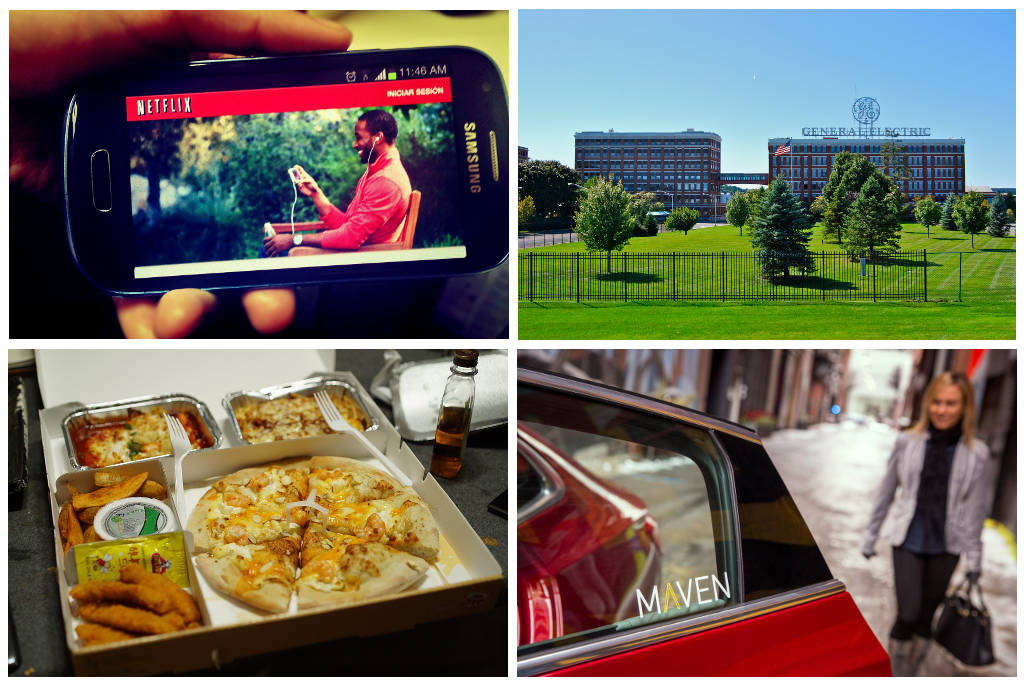 2. Why General Electric moved to Boston

Why is Netflix so popular globally?

Millennials—those born between 198os to 2000s—don’t like watching TV programmes when they are broadcast, on a specific device (the TV) and while being confined to a drawing room.

They like to consume content at a time convenient to them, on a device of their choice and while on the move. Netflix’s business model is designed to pander to this desire.

The subscription may appear steep when compared to home-grown competitors. Eros Now’s subscription starts at Rs 49 per month, while Hotstar is available for free. And then there is rampant piracy.

Can Netflix conquer these adversities and win over Indian audiences?

Netflix has a well oiled strategy for entering a new market.

Let us address the elephants in the room—the local competition (Eros Now, Hotstar) and piracy.

Eros Now offers local Bollywood content at 10% of Netflix’s subscription price, while Hotstar offers its content free. So why will people not prefer them? Because their content is not exclusive or original. It can be viewed on TV channels with regular monotony.

Let us move to piracy. In India piracy is not frowned upon. People indulge in it recklessly. So why will people pay to watch content which they can and have been viewing for free?

Netflix’s strategy is simple and is based on its experience in other markets where piracy is rampant. It offers a month’s trial. Once people experience the quality, they are willing to officially subscribe—for the price of a single Uber ride—and view the content in HD, without limit. Awesome content, available at an attractive subscription price will make it unattractive and unprofitable not to subscribe.

Can this strategy work in India?

Let me extrapolate with Uber’s example. In over two years since it entered India, it has gained upwards of 35% market share by disrupting the ubiquitous black and yellow taxies.

Value equations have changed. Earlier people valued getting highest quality at lowest price. Today people value good experience and are willing to pay for it. That partly explains Uber’s success.

Come back to Netflix, once users experience the exclusive, original and gripping content in HD, many in the cohort will be willing to pay the subscription price. After all, one month’s subscription is just about the same as one Uber ride.

2. Why General Electric moved to Boston

GE announced it will move its global headquarters to Boston, Massachusetts, from Fairfield, Connecticut, where it has been based for the last 41 years, supposedly due to an unfavourable tax system.

For that one needs to look at how its business model has changed.

GE sells machinery and equipment. But in recent years it seemed that its product range has become increasingly irrelevant. Cross-industry competitors compelled it to change its value proposition, shifting it from merely supplying reliable machinery and equipment to being outcome-based. This was done by collecting data from sensors, scanners and imaging devices embedded in the equipment, analyzing them using Big Data analytics and then providing guidance on actions to take which would lead to improved efficiencies and performance.

Take the jet engine. GE believes it is not in the business of merely selling jet engines but certain outcomes. This it does by installing sensors in the jet engines, which then spews out data at high speed. Using Big Data analytics, GE guides the jet owner on steps to take in real time which will result in improved engine performance—less down time, more mile flow, less fuel consumed. The outcome-based approach is helping GE win trust and business from new and existing customers.

As Michael Porter says in this article in The Boston Globe: “Today, manufacturing companies are moving from just mechanical and electrical to becoming software and data analytics companies.... For example, after-sales service is shifting from reactive (break-fix) to predictive and preventive. SCPs [smart, connected products] allow knowing what is wrong to make service more efficient, repairing products before they fail, and even fixing problems remotely.”

Who powers these new strategies? People.

Fairfield, the location of its current headquarters, is a small town, where the kind of talent the new GE needs is not easily available.

Boston, on the other hand, is an educational town with the right talent in abundance. It has over 55 world quality colleges—MIT, Harvard—and the state of Massachusetts spends more on R&D than most regions in the world.

As Porter says in his article, “The Boston region ... has long been a major hub in business-to-business software. Leaders such as PTC, Autodesk, Dassault, and others have a major presence here, and Boston has also spawned leaders in data storage, data analytics, sensors, and IT security.”

GE wants to be at the centre of this ecosystem so it can draw upon the required resources.

This move will also help Boston. It will have the same positive impact on the local economy as when Formula 1 reaches a city.

Indian IT biggies—Infosys, Wipro, TCS, Cognizant—too have set up offices in Silicon Valley to leverage such a culture.

What is the implication for India?

To stay competitive, more and more companies will have to become outcome-oriented. They cannot just sell products, they will have to sell outcomes and performance. For this they will have to willingly embrace digital strategies. Who will facilitate this transformation? Digitally savvy people. Companies will be compelled to make a bee-line to where these kinds of talent are available in large numbers.

College towns like Manipal in Karnataka, Vellore in Tami Nadu, Kota and Pilani in Rajasthan, Kharagpur in West Bengal, Warangal in Telangana, Aligarh in Uttar Pradesh, Vadodara in Gujarat, Pune in Maharashtra, will witness big growth and companies—startups as well as large firm—are likely to set up offices here.

State governments will have to become more business friendly to attract and retain industries, as benefits also accrue to the states by way of employment and a boost in commerce.

Will states lay out the welcome mat?

Some appear to have done so, vying to attract domestic and foreign investment. Witness Vibrant Gujarat, Resurgent Rajasthan, Sunrise Andhra Pradesh, Golden Maharashtra, Bounteous Karnataka, UP: the land of opportunities.

The Indian government is pursuing this strategy at the highest level—no visit of the Prime Minister is complete without pitching India to global investors.

Till 2015, app-based food delivery companies were the darling of investors. According to Tracxn, a startup analytics firm, in 2015, 31 food tech companies raised as much as $161.5 million, with Zomato alone raising $110 million.

Armed with funds, these companies scaled up their operations by:

The single-minded objective was to acquire and retain customers at all cost. Why? Investors valued the companies based on multiple of revenues and these companies recklessly pursued unprofitable growth to win higher valuations from investors.

The customers who were showered with attractive promotional offers and discounts had no loyalty to any particular site. They scoured the net to see which aggregator gave the best deal.

Over time, food delivery companies started running out of cash. This time when they looked for more funding, investors asked tough questions and were unwilling to finance this reckless adventure.

Faced with this reality the aggregators cut back on discounts and  the customers cut back on ordering with them. This put in motion a negative feedback cycle, which seemed to be collapsing on itself.

In November, Zomato’s founder Deepinder Goyal sent an email to all employees painting the real picture: “We are far behind numbers that we promised our investors for this financial year (March 2016) ... We are close to not living up to that for the first time in 5 years. So we really need the sales team to achieve peak performance and it needs to happen right now.”

Clearly, results were not visible on the ground, prompting Zomato to suspend operations in four cities.

TinyOwl is undergoing restructuring too. As a part of the strategy it laid off its staff. There was such animosity to this move that a member of the founding team was held hostage by frustrated employees.

Foodpanda is rumoured to be scouting to sell its India business. It is valuing itself at a bargain price of $10 – 15 million, but there seem to be no takers.

To put the current price in context, last year it raised $300 million from Berlin-based Samwer Brothers and Goldman Sachs to bolster its global business. A large part of this fund was invested in India to acquire Tasty Khana and Just Eat, and to promote itself to ward off threat from Zomato, Swiggy and TingOwl.

Result: On a turnover of Rs 4.8 crore it ran up a loss of Rs 36 crore (FY ending March 2015). Its top management team came under a cloud following allegations of irregularities in its operations. It has let go of hundreds of employees.

Bangalore-based Dazo had to down shutters for lack of funds and SpoonJoy too is facing a funds shortage.

Is there hope for salvage?

Here’s my take on the root cause of the problem and some solutions.

During my interaction with food app companies I got an impression that they have built business models to make investors happy and continue to take decisions to keep them in good spirits—by striving to get sales at any cost; adopting strategies that can be scaled up even if they do not deliver good experience to customers; relegating chefs to support functions; buying sales; hiring people to scale up and letting them loose to get business at all cost, without proper training and then ruthlessly sacking them when results do not show.

To live up to their promise, I would propose food tech companies do the following:

General Motors announced in January that it is beta testing Maven, a car-sharing and renting service, in Ann Arbor, Michigan.

It appears that Maven is inspired from Zipcar, but with a difference: it is not based on a subscription model. Drivers can rent it for as low as $6 per hour, inclusive of fuel and insurance.

Maven’s service will have cars parked at strategically located car parks. Drivers can reserve a car and unlock it using a special app. The inside of the car is loaded with technology—satellite radio, onboard wireless access and sync software with Apple’s Apple Car and Goggle’s Android Auto.

What made GM launch a car-sharing service?

The auto company has seen the writing on the wall.

There seems to be an attitude change among car buyers. They no longer equate buying a car with coming of age. More and more young people—who seek career opportunities in cities—do not wish to own a car. They perceive car ownership as a headache and consider it expensive to maintain. They want to rent a car when required. In the US, they prefer public transport or calling an Uber.

Progressive car companies are bowing to this shift and are experimenting with providing customers options to:

GM seems to have placed small bets on all three options.

Maven addresses the first option. Its $500 million investment in Lyft addresses option 2 and 3. Lyft is investing part of this fund in building autonomous (self-driving) cars.

Zipcar, which popularized the concept of car-sharing through a subscription model, failed. (It sold to Avis Budget Group as its operations proved unprofitable.)

What are the chances for Maven?

It seems, Maven has a better chance of survival for two reasons:

Will such a trend impact Indian car makers?

The Indian automobile industry is likely to undergo a seismic change in the next decade.

Let us take a look at Maruti Suzuki, India’s No. 1 car company, to see how prepared it is for tomorrow.

Not just Maruti Suzuki, but the automobile industry seems underprepared to face the future with confidence. They should realize that whenever technology collides with an industry, disruption will happen. And technology has already collided with their industry.