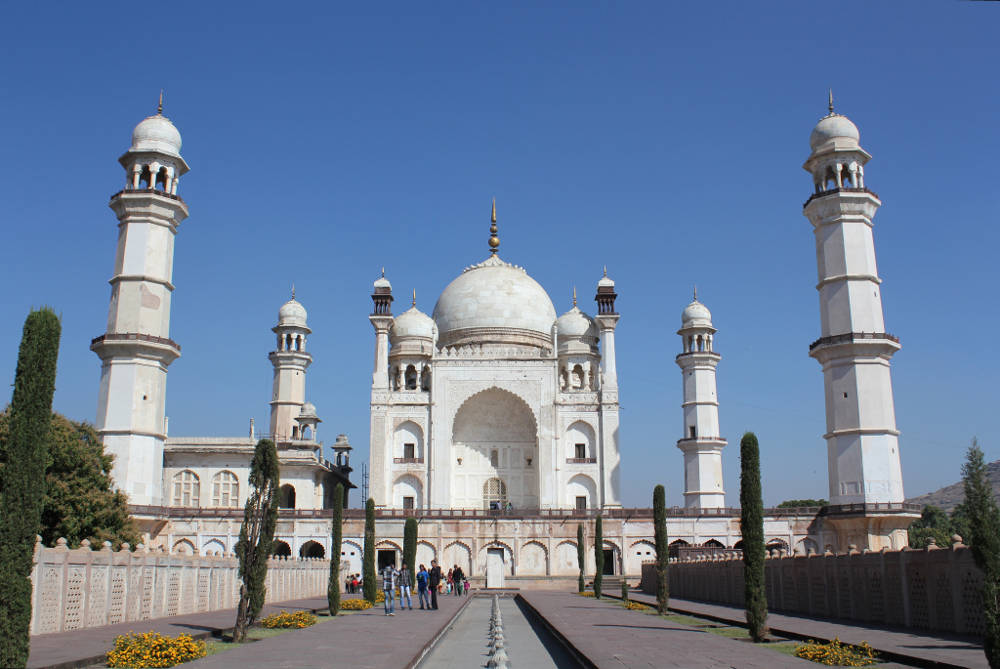 [By Arian Zwegers under Creative Commons]

Did you recognise the picture above? What a stupid question, right? Wrong. This is not a picture of one of the seven wonders of the world. This is Bibi Ka Maqbara in Aurangabad. I am certain less than 25% of Indians reading this article got it right. And if you are a foreigner, then less than 2%. Why?

One is associated with a story of undying love told over and over again, the story behind the other is not remarkable. Anyone here heard of Dilras Banu Begum? No? She was the wife and chief consort of Aurangzeb. Bibi Ka Maqbara is her mausoleum. Taj Mahal is the mausoleum of Aurangzeb’s mother. According to Government of India Tourism statistics, Taj Mahal draws about 68 lakh visitors a year, of which about 20% are foreigners. Bibi Ka Maqbara draws about 6.6 lakh visitors, of which about 2% are foreigners.

Gordon Mills begins his book, Hamlet’s Castle, with this passage:

“In the spring of 1924 the young German physicist Werner Heisenberg went on a walking tour with the great Neils Bohr in Denmark, Bohr's homeland. The following is Heisenberg's account of what Bohr said when they came to Kronberg Castle: Isn't it strange how this castle changes as soon as one imagines that Hamlet lived here? As scientists we believe that a castle consists only of stones, and admire the way the architect put them together. The stone, the green roof with its patina, the wood carvings in the church, constitute the whole castle. None of this should be changed by the fact that Hamlet lived here, and yet it is changed completely. Suddenly the walls and ramparts speak a different language. The courtyard becomes an entire world, a dark corner reminds us of the darkness of the human soul.”

Quoting this passage in his book Story Proof, Kendall Haven, says: “Story, somehow transforms simple stone walls into a vibrant, emotionally charged, meaningful, and exciting landscape.” Just like the story of Shah Jehan’s love for his wife Mumtaz Mahal transforms the Taj Mahal into one of the most recognised monuments and the lack of one relegates Bibi Ka Maqbara into relative obscurity.

In an article series titled Bias, Blindness and How We Truly Think, Daniel Kahneman poses an interesting question. He asks how much would we be prepared to pay, relative to a normal memorable vacation, if “At the end of the vacation, all pictures and videos will be destroyed. Furthermore, you will swallow a potion that will wipe out all your memories of the vacation.” Substantially less, I am sure. In fact, many of us would refuse to go on such a vacation even if it were offered free of cost.

However, tourism departments across the world don’t seem to get it when they try to sell their destinations. The advertising from the Indian state tourism boards fare no better: eye popping visuals, some beautifully shot and some amateurish, companied by assertions read out by Amitabh Bachchan at one end and a tour operator at another. But are people looking to take just beautiful photographs or live experiences?

Vacation rental company Airbnb clearly feels experiences are at the centre of travel. A few years ago under a project codenamed “Magical Trips” overseen personally by CEO Brian Chesky, they tested out traveller reaction for customised and branded experiences. Last year the project went live. The site now offers experiences from truffle hunting in France to learning 20 ways of draping a sari in India.

Daniel Kahneman, whose writings I referred to above, makes a very powerful point in his 2010 TED Talk – “The Riddle of Experience Verses Memory”. He tells us about a story narrated by someone in the audience for one of his talks. The person said that he'd been listening to a symphony, and it was absolutely glorious music. But at the very end of the recording, there was a dreadful screeching sound. And then he added, really quite emotionally, it ruined the whole experience. But, Kahneman asserts that “It hadn't. What it had ruined were the memories of the experience. He had had the experience. He had had 20 minutes of glorious music. They counted for nothing because he was left with a memory; the memory was ruined, and the memory was all that he had gotten to keep.” In a later portion of the same talk he says so powerfully and beautifully that “Our memory tell us stories, that is, what we get to keep from our experiences is a story.”

So if it is experiences we are seeking, we need to know whether we will get experiences we will treasure when we visit a certain place. Whether we will have great stories to tell. Insipid advertising, no matter how lovely the visuals may be, can never excite us as much as wanting to relive someone else’s experience. I am sure all of us can think of examples where we had seen tourism advertising of a certain place but the desire to pack our bags and go really happened when we saw pictures on Facebook of our friends having fun or heard stories about their experiences when they returned. Facebook has helped world tourism more than we can imagine.

As we listen to someone telling a story, something fascinating happens in the brains of the listener and the storyteller. Neurons light up and follow a similar pattern in both their brains. We are basically both “living the same experience”.

This phenomenon was first described by Charles Gross of Princeton University in June 2010 in the Proceedings of the National Academy of Sciences. In an experiment, they wired the brain of a person, got him to kick a football, and recorded his brain pattern. As expected, several parts of his brain lit up, including the part that controls motor functions. They then wired another person and described to him the fun someone had had kicking a football. The brain pattern mapping showed that very similar parts of the listener’s brain lit up—including the part that controls motor function, even though he wasn’t moving.

That is the power of stories. It lets us live experiences that we haven’t had and if the feeling of that “borrowed” experience is great, we would like to live it again— in real life, ourselves.

All memorable travel experiences are about stories—stories of the local communities and their cultural traditions, stories told by the expert local guides, and stories about the travellers themselves that become part of the travel experiences. As Shawn Callahan from Anecdote says, “stories gives our memories a fighting chance of survival”.

Tourism authorities of all countries and indeed all our states could do very well to collect stories from travellers, make a selection, and broadcast them to the relevant audience. When we hear stories about people like us having a great experience, we will vicariously live that experience. This will build a strong desire to feel that experience again, first-hand.

The other powerful thing travellers’ stories do is they make the information authentic. I don’t need to go into how our brain raises red flags to stop us from believing even a small portion of the promises we seen in advertisements. But when people like us narrate their experiences, we believe them. Stories are credible.

The only advertising from India that I think comes close to what I am describing as ideal, is one of the initial ‘Incredible India’ spots that starts with a foreign tourist pausing to decide which experiences to put on a picture postcard. Over the next two minutes we are transported through his mind’s eye, and we live the various experiences he has had from Ladakh to Lakshadweep and from Rajasthan to Arunachal Pradesh. Finally, overwhelmed, he just writes “Incredible India” and drops the postcard in a letter box. I am certain that ad got more people interested in coming to India than any other.

Only perfect practice makes perfect
Managing change, a story at a time
Untangling messy people issues
Want to trigger action? Use a story
You might also like