A battle of unequals

As the Adani group pushes through the doors at NDTV, owners Prannoy and Radhika Roy find themselves with their backs to the wall. What are their options? 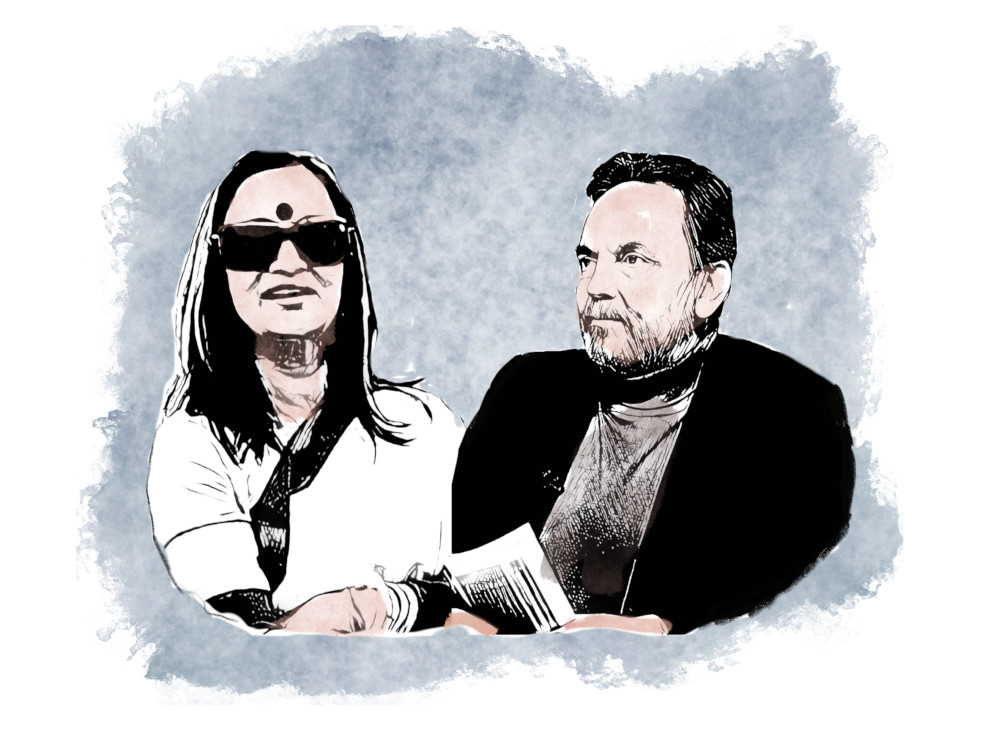 For a week now, the twists and turns on the NDTV takeover saga continue unabated. Clearly, the potboiler has everyone hooked. Especially since the dramatis personae include two of the country’s biggest industrialists, Mukesh Ambani and Gautam Adani, both known for their proximity to Prime Minister Narendra Modi, and Prannoy and Radhika Roy, the husband and wife team who founded NDTV and turned it into one of India’s most iconic television and digital new brands.

Now, there’s a common question that’s on everyone’s mind: will the Roys put up a fight? Or will they eventually make way for Gautam Adani, bringing down the curtains on an incredible 38-year journey? Till this weekend, if one were to stay away from pure speculation—and stick to facts available in the public domain—the picture was still unclear.

But now, as things stand this Monday evening, even as I write this column, the fog is starting to lift. The Roys have backtracked from the initial seemingly hardline position and disclosed that they have written to SEBI to ask whether the ban imposed on them allows them to convert the warrants into equity shares in RRPR. (Read the latest disclosure in our Dig Deeper section right at the end.) Earlier they had asked Vishvapradhan Commercial Pvt Ltd (VCPL), the shell company owned initially by Reliance, later Mahendra Nahata and now by the Adani group, to seek written approval from SEBI—and they had straightaway refused to do so. Perhaps they were concerned about the optics of Adani asking for SEBI approval in this case. But on Monday evening, Adani group disclosed that VCPL has also sought clarity from SEBI on this.

If SEBI now clarifies that the ban may not affect this transaction between RRPR and VCPL, two unlisted companies, it could clear the way for Adani to get their 29% stake in NDTV. And then the game is over for the Roys for all practical purposes. After the warrant conversion, the Roys will still have a 32% stake in NDTV. But the Adani group could push for control through either the open offer route or through open market purchases.

So what options do the Roys have?

A legal fightback: It isn’t as if the Roys don’t have any legal options. An important consent clause has been violated in the 2009 loan agreement. In fact, in their first disclosure, within a couple of hours of the Adani Enterprises’ disclosure to the bourses, the Roys pointed out that neither were they kept informed nor was consent sought before the ownership of VCPL changed from Nahata to Adani.

Now, under the Ministry of Information and Broadcasting (MIB) regulations,

NDTV’s uplinking and downlinking licence was granted to the Roys because they hold 61.45% stake in NDTV. (Remember that an Indian shareholder needs to hold a minimum of 51% in any news television channel.) In case the Roys’ stake slips below 51%, NDTV will no longer be compliant with MIB guidelines. Unless of course, they sign a “single unit” agreement with Adani, as was done between Reliance and Raghav Bahl in 2011, before Reliance took charge of Network18, exercised the convertible debentures and then initiated an open offer in 2014. So far, there has not been public disclosure from either NDTV or the Adani group on this front.

Mounting a legal challenge is tough. It is seldom a David and Goliath fairytale. For one, the wheels of the legal system grind slowly. And any legal battle, either in the High Courts or the National Company Law Board Tribunal (NCLT), could be protracted and costly. Besides, taking on the powerful Adani group with its huge resources presents monumental challenges.

Deal with the loan: Many people ask why the Roys weren’t able to pay back the interest free loan of around Rs 403 crore. The assumption is that by pledging its remaining 32% stake in NDTV, the Roys could have freed their entire stake in RRPR of any encumbrances, which amounts to another 29% stake in NDTV.

Here’s the catch: under the 2009 loan agreement, VCPL retains the exercisable warrants indefinitely, even after the loan is fully repaid. So even if the Roys found some other way to pledge their remaining shares—and in fact, even that option is not permissible under the same agreement—it wouldn’t have made any difference.

So the most obvious question is why did the Roys agree to such onerous conditions?

In the early part of the 2000s, NDTV was flying high. It was the numero uno brand in the news television space. Apart from Prannoy himself, its anchors like Rajdeep Sardesai, Barkha Dutt, Arnab Goswami and many others, commanded huge following. The stock price was soaring. And that gave them the licence to make big forays into the entertainment space with NDTV Imagine through a partnership with NBC and NDTV Good Times, in partnership with Vijay Mallya.

Just before the global financial crisis of 2008, the Roys had built up a bloated structure, and it was saddled with high debt and poor financials. Its diversifications into entertainment and the lifestyle space had backfired. Raghav Bahl’s Network18 group suffered the same fate. It had expanded into several spaces, based on thin cash flow generated by CNBC-TV18, its business television channel and the only profitable company in the group.

And as first generation media entrepreneurs, neither the Roys nor Bahl had access to large pools of capital of their own. And yet, they had to maintain their 51% stake, as mandated by MIB regulations. Back then, India was viewed as one of the hottest consumer markets in the world. Growth opportunities in media were aplenty.

Both the Roys at NDTV and Bahl at Network18 may have come to the same conclusion: after the global financial crisis, capital had completely dried up. And scouring the market desperately for capital, Ambani seemed their only hope.

During the negotiations, from his side, Prannoy secured editorial independence by inserting a clause that VCPL would not interfere in editorial decisions. He also added a consent clause that kicked in the moment VCPL wanted to increase its stake beyond 26%. And he bet on the fact that within 3-5 years, when the business environment improved, a new buyer would be found who could uphold the value of the NDTV brand. Eventually, instead of things improving, the business went south.

The news television space saw multiple entrants. In a big coup in 2005, Haresh Chawla, Network18’s group CEO, weaned away NDTV’s CFO Sameer Manchanda and Rajdeep Sardesai, who was the face of NDTV, to start CNN-IBN. And within 15 months, CNN-IBN had overtaken NDTV as the largest general news channel. In January 2006, the Times group tied up with Reuters for Times Now. In 2016, by the time Arnab Goswami left Times Now to start Republic TV, NDTV had slipped further down the ratings battle.

It wasn’t just intense market competition. The Roys at NDTV faced many other serious challenges. In 2014, a new hostile government at the Centre slashed government ads for channels which it felt were opposed to it. NDTV was seen as the leader of the pack in repeatedly questioning the government on its various policies. Also, defamation suits by large corporate groups like Adani became common-place.

Reach an amicable solution: For the past few years, the Roys have been in the crosshairs of governmental agencies. They have been subjected to CBI and ED raids, had their passports impounded and stopped from flying out for an event in the US.

In June 2019, the markets regulator barred the Roys from the capital markets for two years and also restrained them from holding any board or top management role at the company. After the Roys appealed, on July 20, 2022, the Securities Appellate Tribunal (SAT) later upheld the SEBI order, but ruled that the penalty would be reduced from Rs 25 crore to Rs 5 crore.

There is yet another pending SEBI matter that’s coming up for hearing at SAT on November 26 this year. Prannoy and Radhika Roy had appealed against a SEBI order restraining them from the securities markets for a period of two years and a penalty of Rs 27.5 crore. In case there is no SAT ruling that day, it will be assumed that the Roys have served the entire period of the ban. And SAT will be left to deal with the issue of the penalty.

At 72, Prannoy Roy no longer has the stomach for a fight. A few of his former colleagues at NDTV say he is now tired and disillusioned.

Yet there is a burden of expectation from NDTV loyalists. After all, an entire generation who grew up in the 1980s and 1990s still view the sauve, soft spoken anchor and editor Prannoy Roy as a pioneer and a legend. In this super-charged, polarised media environment, Roy reminds them of a bygone era. And if the Roys exit NDTV, many of them feel that it could mark another nail in the coffin of independent journalism.

Whatever be the popular sentiment around the Roys, the only way that they can bow out gracefully—and without being seen to have capitulated—is to let SEBI clear the way for the Adani warrant conversion. They can then hammer out a deal to sell their remaining stake to Adani at a fair value, along with a bailout package for some of their veteran anchors. In 2014, Raghav Bahl exited Network18 with a Rs 700 crore booty. Hopefully, if Gautam Adani gives them a handsome deal, the Roys, who created the cradle of Indian television, could finally walk into the sunset.

1. The NDTV disclosure to the bourses (Monday, August 28)

Updated on August 30, 2022: The story was updated to clarify some details on the Roys' matter before the Securities Appellate Tribunal

7 Big Trends in Air Travel: What to Expect in 2023
Adani’s NDTV takeover: The end game
What’s holding up Gautam Adani’s takeover of NDTV?
Capping the moonlighting volcano
You might also like