Why we fail at execution

Lack of alignment can trip up even the most well-intentioned change process. Here’s what you can do to fix it. 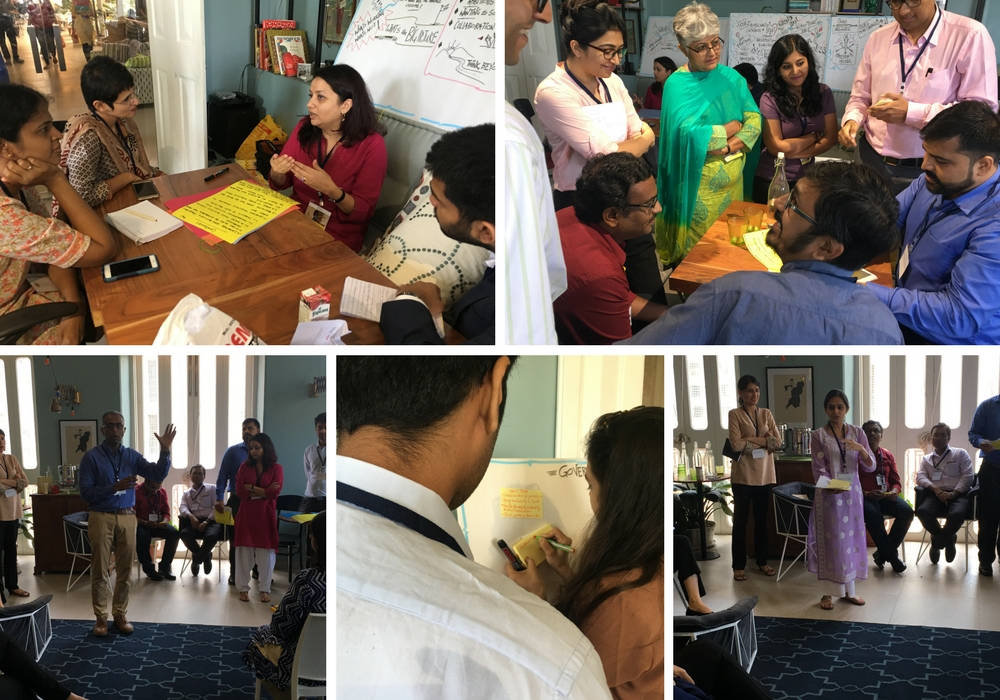 [Striving for Collective Impact: Vignettes from a recent Samhita Social Ventures workshop on sanitation held at the Ministry of New, Mumbai, facilitated by Founding Fuel. The workshop, supported by the Bill & Melinda Gates Foundation, drew a diverse set of participants—from the government, business and the social sector.]

Earlier this week, Founding Fuel was invited to facilitate a workshop on sanitation, involving representatives from the government, business and the social sector. Most folks had found that working in isolation hadn’t delivered results. So the idea was to co-create a new platform that would help bring out the best from each of the key stakeholders in a mutually reinforcing manner. At the start though, the common refrain from the participants was that Prime Minister Narendra Modi’s clarion call had done a lot to raise awareness around the issue of sanitation, but on the ground, the reality was stark: We had a long way to go in achieving the goals of making India free of open defecation. It was a complex challenge, at many levels. And unidimensional solutions wouldn't cut ice.

The week before, we were engaging with the top leadership of a global company on an action learning project that lay at the cusp of business transformation and leadership development. After a three-year-long clean-up process, the managing director wanted to build momentum for accelerated, sustained growth. And the market offered them enormous headroom to grow, even doubling their top-line in two years. Yet the key issue at hand: How do you create bandwidth in its leadership team to seamlessly execute its growth agenda?

As we head towards the half-yearly mark and as I look back at the range of issues that I’ve witnessed across India Inc over the course of this year, there are some universal ones that seem to jump out: Energising leadership teams to get things done; figuring out a new way to set key organisational priorities. Or, how to combine creative imagination with a structured, disciplined and collaborative approach for innovation to happen. And as issues of corporate social responsibility and shared value take centre stage, how should business work with other stakeholders in solving complex social challenges.

None of these issues are new per se. Except that as large sections of India Inc crank up the growth lever, I’m betting that many of these issues will come to the fore. So let me share four specific learnings, in the hope that these might be relevant for at least some of you.

Breaking the deadlock: Indians love to argue and debate. We know that only too well. But the ability to listen and build on each other’s strengths remains, for most part, a rare skill. Listening skills and empathy are both in short supply. And given that many organisations and entire sectors operate in silos, this can become an extremely frustrating process. In the absence of a well-designed process, very often the CEO tends to lose patience and apply his veto power. And that’s why most leadership teams need help with process facilitation that helps unlock themselves from the tyranny of their experiences, to be able to appreciate a different viewpoint. A facilitator is often mistaken as an expert who resolves conflicts. Instead, he uses the right set of tools and holds the space for leadership teams to achieve their own breakthroughs. Given our obsession with so-called experts, this is a particularly difficult construct for many CEOs to deal with.

What’s the right culture: Culture eats strategy for lunch. You’ve heard that a million times. Yet many organisations list out a bunch of descriptors that are meant to craft the culture they seek to build. And I’ve found most of them seldom go beyond the usual clichés: Trusting, transparent, fun, democratic, etc. What’s more, the intended culture seldom takes root because people don’t get to experience it. And that’s partly because the leaders themselves don’t live the values. HR guru Dave Ulrich suggests junking this internally oriented approach. Instead, he says firms need to see how they actually win in the marketplace with customers. And those very same values should then drive and reinforce the culture.

Making multi-stakeholder conversations work: Most complex social or business challenges need different actors to come together in order to achieve breakthroughs. Yet people continue to cling to their functional or sectoral identities, which poses real challenges. NGOs seldom trust Big Business. Big Business isn’t very impressed with the way governments work. And catalytic organisations don’t think Big Business is willing to step up and commit resources. How do you break that deadlock in such a low-trust environment? It isn’t easy, but the trick is to get these actors to detach themselves from their self-imposed blinkers, to explore new territory, and co-create breakthroughs. That’s where Design Thinking tools are able to sometimes separate the idea from the person. And tools like World Cafe allow participants to step out of their worlds and let their creative imagination take root.

Focusing on the things that matter: I’ve found several organisations, whether business or in the social sector, tend to go astray because they bite off more that they can chew. And leaders aren’t able to prioritise what’s really important and what’s not. Here, you’ll perennially hear managers cribbing about over-work, stress and possible burnout. These are the symptoms of a larger problem: Lack of focus. People get caught in an activity trap and are unable to distinguish between urgent and important tasks. Shifting leaders from that zone is a tough, arduous process. It takes time and patience to shift behaviour, even after you’ve got the leaders to craft a shared agenda. Which is why most transformational work seldom happens at a workshop. The really serious business leaders know that the real transformative work invariably starts after the hype and hoopla is over.

bringing barriers down; opening the mind; connecting with another individual's positive energy; keeping away ones own negative energy; arguing to improve and not roadblock; managing logouts, denials and other whirlpools of potential confusion; keeping the flock together; remaining goal oriented within the engagement;...etc. etc. etc. - daunting, not meant for the faint at heart. even before that accepting the facilitator as the 'facilitator' not the 'surgeon'. even boards make that error in judgement. perhaps in our minds when we refer to transformation, we are actually constraining it with 'minimal change', especially when it is a going concern. now, that is a serious cross-purpose...

Adani’s NDTV takeover: The end game
What’s holding up Gautam Adani’s takeover of NDTV?
Capping the moonlighting volcano
A battle of unequals
You might also like