A roundup of news and perspective on disruptive technology from around the world. In this issue: 3D Printers, Artificial Intelligence, Autonomous Cars, Cyber Security and Internet of Things. 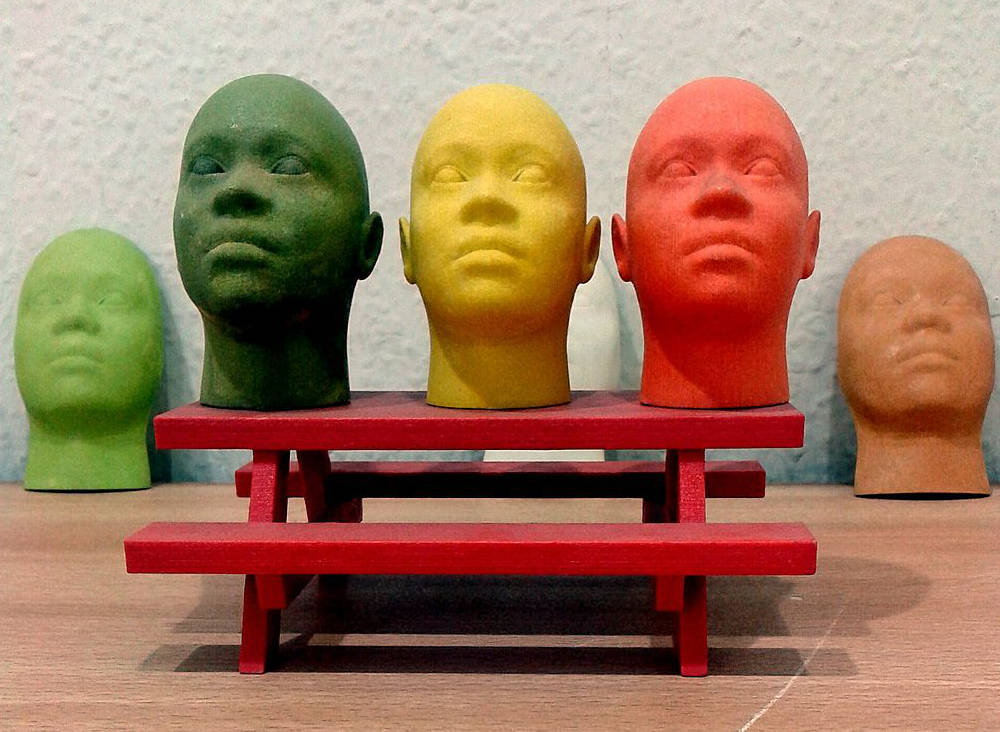 [Photograph: Miniature human face models made through 3D Printing by S zillayali under Creative Commons. Cropped from the original]

Where to look, if you are looking for the most interesting applications.

The scope, scale and range of 3D printers is expanding at a breathtaking pace. You can now build an environmentally friendly clay house using a 3D printer. A hotel in the Philippines is building a suite of rooms using the technology. Last week, the Chinese sent a satellite with 3D printed parts. And Nasa picked the winning entry for its 3D Printed Habitat Challenge—a Mars Ice House. A Berlin candy store is trying to attract customers with its 3D printed fruit gum sweets.

However, in no other place has it caught on as it has in healthcare. Gartner says healthcare will be an early adopter of this technology. A cancer patient in China got a 3D printed sternum implant. A pediatric neurosurgeon in Boston Children’s Hospital finds immense value in 3D printing the patient’s brain before the operation. Surgeons working on ear reconstruction practice on 3D printed ears rather than potatoes or bars of soap to improve performance. Researchers at the University of Akron, US, have developed 3D printed drug-delivering micro-needles that will help in treating a range of diseases including melanoma cancer. Scientists are getting closer to printing soft and intricate materials—something that hasn’t been possible with 3D printing so far. It’s easy to see why healthcare is fascinated with this technology. It is customisable, and human beings are unique. And 3D printing can make complex objects that traditional methods can’t. Just the kind of demand waiting to be met—or prayers waiting to be answered.

Accelerating fast, but is it there yet?

Artificial Intelligence instils both fascination and fear—a theme that the 2013 movie Her explored beautifully. What if a man falls in love with an operating system, and what if it dumps him for someone more intelligent? Recently in London, the AI ad posters of a coffee brand Bahio scanned the faces of people nearby to serve relevant text and images. IBM’s Watson—which beat humans in Jeopardy game in 2012—is not only being put to new applications in commerce, medicine etc, but is also gaining new capabilities—language, vision and speech.

We grew up believing that what’s easy for computers is hard for human beings, but then what’s easy for human beings is hard for computers—such as pattern recognition. With the developments in AI—and here are some examples from Facebook’s Artificial Intelligence Lab—we need to be less sure about that. But, is it there yet? ‘There’ meaning artificial general intelligence or the point where AI would be greater than human intelligence (let’s for a moment ignore those who say there is nothing like human intelligence, what with our wars, violence and hatred). Not even close, some argue.

But then we are probably asking the wrong question. It’s not whether AI is there yet, but how fast it will be there. Our intuitive answers might not be up to speed with exponential growth.

Competition is intensifying. Is wrestling with regulations the next phase?

While the whole world is looking at the US, it might turn out Japan will have some of the first self-driving taxis in the world. It won’t surprise anyone who has experienced Japan’s toilets. And again, not surprisingly, they will be called Robot Taxis.

Meanwhile, as competition among companies heats up, there are discussions around who will come next, and what their game play would be. GM said it will roll out a few self-driving Chevy Volts next year. There is debate around whether Apple’s car will just be electric or autonomous and much speculation on what Elon Musk’s thinking on self-driving cars is.

Well, who will win the race? People at large. According to one count, self-driving cars can save 300,000 lives per decade in the US. But some of the most interesting debates will be around the exceptions—the lives that could be potentially claimed by autonomous vehicles. What if hackers gain control of a car—stop a Tesla remotely, or gain control of Cherokee’s engine, steering and brakes? And who is responsible if there is a crash—the vehicle owner or the manufacturer? For surely, robots can’t be treated like humans?

If Season 1 of Mr Robot, an American TV series on a bunch of hackers, ended with a private company’s data getting erased, Season 5 of Homeland, centred around a talented and edgy CIA officer, started with government data getting stolen. Everywhere one is constantly reminded that the idea of secrecy—and privacy—is just an illusion. There’s a fight to claim it back, which is driving an entire industry. CB Insights lists at least seven cyber security firms in its list of unicorns (companies valued at over $1 billion). London Stock Exchange has an exchange-traded fund tracking cyber security firms. Governments are worried too, and it’s increasingly becoming an important element in foreign policy—as it should be, says India’s national security advisor Arvind Gupta. Last week US President Barack Obama signed a cyber security deal with China. And yes, October is Cyber Security Awareness Month in the US.

Internet Of Things: Amazon’s new user, A Pasta’s past, and human/machine dynamics in the IoT world.

Now your washing machine can order washing powder. But is it a good thing?

Amazon has a new user. A washing machine. The ecommerce giant has tied up with General Electric to extend its Dash Replenishment service to smart washing machines. It’s a first step. But, increasingly, there is more information embedded into a lot of products these days. You can get a pasta pack’s entire journey through the value chain from its QR code. And, there is more computing power, sensors and connectivity pushing the adoption of Internet of Things.

This will change our relationship with the products and the assumptions we make about them.  As Marcelo Rinesi writes, “Just as any user feels their computer to be a fairly unpredictable device full of programs they’ve never installed doing unknown things to which they’ve never agreed to benefit companies they’ve never heard of, inefficiently at best and actively malignant at worst (but how would you now?), cars, street lights, and even buildings will behave in the same vaguely suspicious way. Is your self-driving car deliberately slowing down to give priority to the higher-priced models?” and so on.

The future is going to be a different country.

Thanks for the suggestion Sudipto. Will do my best to include a wider range of sources.

Might be interesting to collate from a wider range of literature going beyond commercializable stuff, such as Physics of the Future, by Michio Kaku