Aadhaar and the Buddha's Middle Path

Titles of books, essays, newspaper stories and panel discussions play many different roles. Often, they capture the crux. The title of Malcolm Gladwell’s bestselling book The Tipping Point: How Little Things Can Make a Big Difference pretty much says what the book is about. News headlines almost always summarise the news. But sometimes, a title is an invitation, a first stepping stone, to explore the subject further. ‘Aadhaar - Dystopia or Utopia?’ the title of a panel discussion held on Sunday, October 29, 2017 as part of the Bangalore Literature Festival clearly belonged to the second category.

While the topic might have reflected the polarisation one might see on Twitter or Facebook—and among those who get disproportionately influenced by debates on social media—the conversation was nuanced and provided insights into why politicians, policy makers and bureaucrats take specific positions or a particular course of action. For example, UIDAI found out that making it easy for people without fingerprints (which can happen because of manual labour, old age and other reasons) also led to some people misusing it. There is a trade-off between convenience and security. And security is often a cat and mouse game. Systems evolve, and they never reach a state of perfection.

As Jain said, “Technology per se, particularly digital technology, is very flexible, and it does have the capability to say if this is the situation, then follow some other path and get to the end you want to.”

Different societies, and countries, approach the problem differently. For instance, Ramesh, during his tenure as a minister in the UPA government, was in the middle of a storm when the debate raged all around about genetically modified food. The government could then have taken the permissive approach of the United States, or it could have taken the prohibitive approach preferred by Europe. Ramesh said it decided to follow the approach of the Buddha and took the middle path, a precautionary approach. That has relevance for Aadhaar, he said.

And the approach to that middle path is to listen to the different voices, said Maira. So decision makers can understand the fears and concerns that can be very real for those who are feeling those concerns. “Our discussions break down into real harangues about are you for it or against it. You cannot say ‘I am exploring it’… there is no room to explore issues that are pretty complex,” he said.

Do listen to full discussion.

Aadhaar and the Arnab Monologues: Pointers to contemporary politics, different kinds of critics, media narratives and why writing is a bad idea from a literature festival 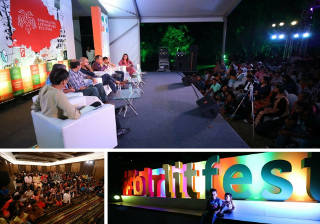 Aadhaar and the Arnab Monologues

Lessons from India’s tortuous path to make tech work for the people
Gigerenzer’s simple rules
Trendspotting: 2020 can make or break
Despatches from Surat: There’s gloom, but no doom here
Making sense of the New Capitalists
The Rahul Yadav Story You’ve Never Heard Before
Saving Private Flipkart
The fault in our startups
Flippin’ over backwards
A day in the life of India