EY’s recent report on media and entertainment calls it an industry under renovation. What is changing? How should those in the business look at reinventing the business model? Veterans from the industry discuss the lay of the land

Like many other industries, the pandemic has roiled the media and entertainment industry. This Clubhouse conversation explores whether it has triggered some fundamental shifts in the way the industry operates.

The chat comes against the backdrop of a recent report that EY did in partnership with FICCI on the key trends in India's media and entertainment sector.

In the room were

The chat was moderated by Indrajit Gupta and Charles Assisi, co-founders, Founding Fuel.

A summary of the conversation

Edited for brevity and clarity

Highlights from the EY report

“Every publisher went online and put a dotcom at the end of their brand name. But did it really mean success?”

The report is based on perspectives from more than 120 CEOs

There’s a variance in advertising outlook.

Is there an opportunity to build a digital newspaper at scale, with a subscriber base of 1 billion over the next five to seven years?

The EY Report projects a growth of 11% CAGR in advertising in print. Is it a realistic optimism?

“Sometime in July 2020, [EY] said that 30% of people who consume newspapers / magazines, will consume less of that.”

“The assumption here is that the SVOD guys are really the premium guys that everybody wants to get to and they will continue to read print newspapers.”

“There's a fundamental shift in consumer behaviour, which was already underway, which has got accelerated. The numbers will derive from there… The whole market has become a digital market and the impact is going to fall on the entire media business.”

“Every time a new medium comes, media pundits declare the death and demise of the previous platform or medium. The fact is that all of them have survived and coexist. As a broadcaster, it's a coexistence. It's a balancing act. We are in an “and” world, and we all will survive.”

“Ashish mentioned (in the report) that there was a 3 million drop in certain subscription revenue from the cable side. But largely, that means out of 132 million, 29 million people kept paying for the services. And that is very heartening.”

“Let's look at the largest shifts—print was bloated, television was bloated. They've had to rationalize costs. But some of it was long overdue…. And while we've all gone digital, much more than we used to (with reading the news on an app) the fact is that subscription revenues of online media are still tiny. The report says .3 million or .5 million is subscription online news. It's a tiny fraction.”

“Source credibility matters when it comes to news, when it is about your own life. That helped us get some of the newspaper circulation back.”

Is there a future for subscription-only model in India?

“When IPL decided to go behind the paywall, the numbers for Disney+ Hotstar went up… If you look at some of the content from SVOD prayers, it sees a spike for the month that content comes out and then it drops.”

Subscriptions and bundling: How the emerging digital news media could be scalable

“If you pull back, even music started as LPs, then cassettes, then CDs, then Napster, then Spotify, and now your Apple Music. Once you enter the digital mode, the underlying business model has to emerge. Market forces will make it emerge… Look at what Netflix did. It created a bundle by taking rights from multiple studios. That bundle became scalable, because it had something for everyone in it. And slowly, Netflix became bigger than the whole industry, and eventually started making more content and all the studios.”

“You have three or four struggling bands coming together to make a bundle, it suddenly makes a lot of sense.”

“If you think about it, NYT is actually a bundle. It’s a lot of different kinds of offerings put together. You could think about entry points. Someone likes sports, someone likes to read politics, someone likes economics... If you like art, you will pay $10 for a very high quality art newspaper, but not for sports… NYT has made the very calculated risk that everybody will pay a little more for all the other sections. So, you bundle it together for $15… and (sometimes an article on some other subject) interests me—that justifies that extra dollars.”

Does news media have a problem of elitism? 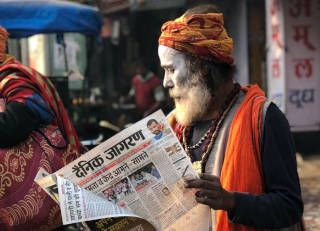 How tech firms are eating media